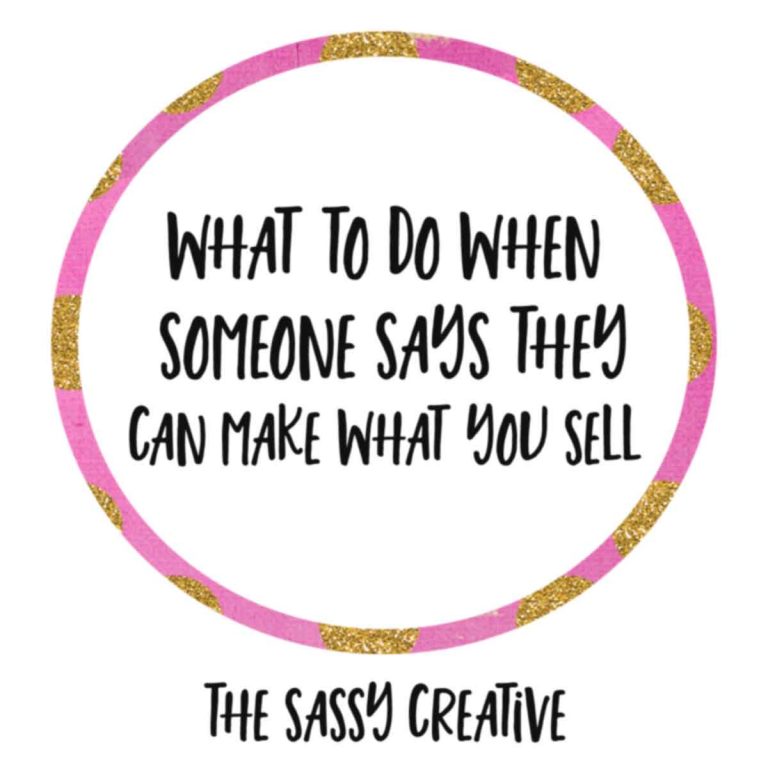 Prefer the audio version? Click here to listen to the podcast.

Today’s topic is not really about tips as a seller. It’s more about your mindset or attitude which can be just as important. Having a defeatist attitude about your business can lead you down a path that will ultimately destroy your business. Spending time on your mindset may seem woowoo, but it is a vital part of the big picture.

A couple weeks ago, I came across a post on Facebook from a fellow seller who was feeling really discouraged by something that one of her co-workers said to her about her handmade business. The conversation I read has been on my mind ever since.

This co-worker basically told the Etsy seller that she was wasting her time with her new side-business because people could make what she was selling themselves, so no one would buy it.

Little did this Debbie Downer co-worker know, the Etsy seller had landed several big sales in the past two weeks. This one conversation cancelled out all of the joy the seller was feeling from those big sales and caused her to feel really discouraged and second guess her recent feelings of success.

So to sum up, the coworker was being a big ‘ol dream crushing jerk.

Now, given that we are in a handmade industry, a common thing that we are going to run into is people telling us that they can just make what we are selling instead of buying it.

This was something that I would hear allll the time when I set up at craft fairs. People would pick up a product off of the table, fawn all over it, look at the price and then suddenly go on about how they could just do it themselves.  People are just plain rude when they do this whether they mean to be or not and it’s something that we are all going to face at some point while running our handmade business.

The first part is realize that those people are not your target market. These people don’t appreciate your work enough to purchase it. This also means that they are not the ones that you are working to sell to. No energy needs to be spent on these people. It’s not a loss because you aren’t trying to sell to those people to begin with. Yes, this can be easier said than done, but the longer you sell the easier this will get.

Now, let’s address the elephant in the room.

Yes, more than likely there is a way to make the same products that you are making. But, in order to make a product that is worthy of selling, that takes time, practice, experience, and skill. All of which are not usually possessed by someone who just haphazardly decides to try to make something new. This is the value that your product offers – time, practice, experience, and skill.

You also offer a product that is fully made without the hassle of rounding up the items, figuring out how to make it, and the all the stress that it entails. The customers who are happy to pay you for the convenience of not having to deal with all of that and your expertise of making a beautiful product are who you are looking for.

So, what do you say when someone says, why would you bother starting a business selling stuff that people can make on their own?

Well, the truth is that most people won’t make it themselves and, if they do, more often than not it’s not going to look like they envisioned it. You have a talent, a style, and an expertise that your target audience will appreciate.

So, ignore the nay-sayers – those are not your target audience. Let them try to figure out how to do it on their own. And, when they make it and it doesn’t turn out right or they figure out that they don’t have the time for it, you can charge them twice as much – kidding, kidding (sort of).

I hope this helped to give you a pep talk of sorts to help drown out the Debbie Downers of the world and keeps you focused on your goals and YOUR customers.